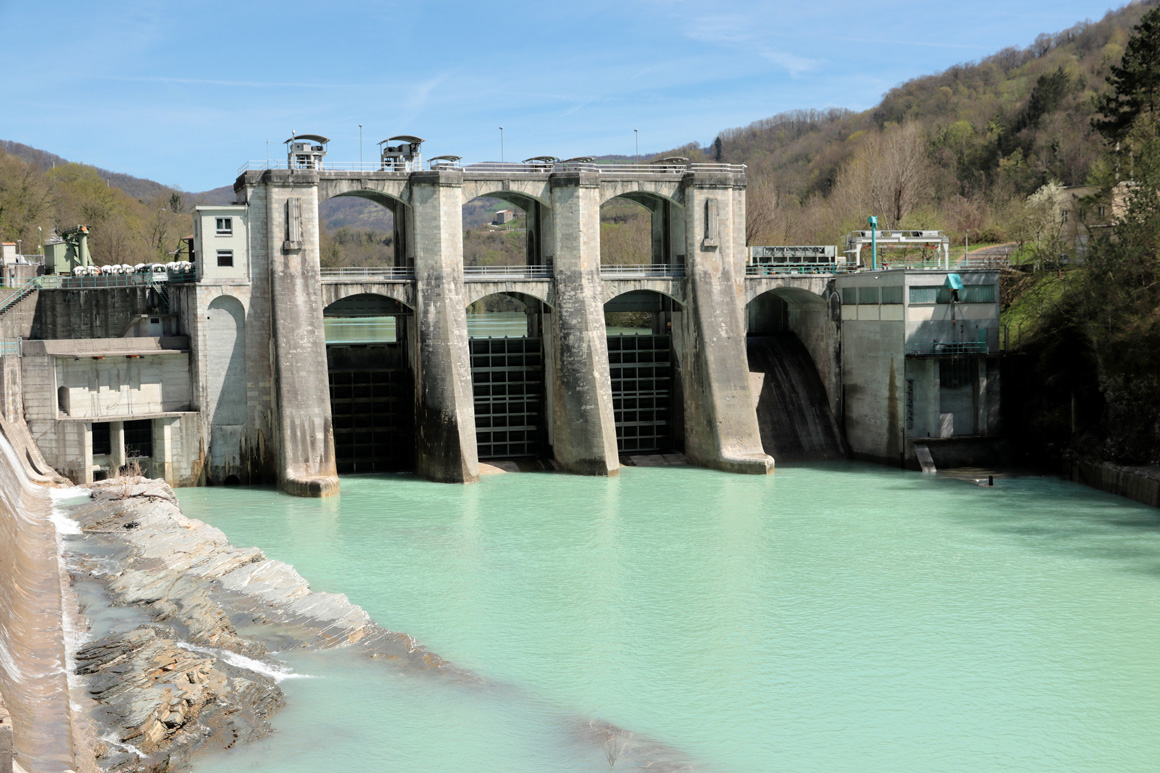 Hydropower plant, Soča River, Slovenia. There are many small hydropower plants in the Soča basin, one of few places where genetically pure marble trout (Salmo marmoratus) are found. Despite this, there are plans for new hydropower plants to be built in Soča. The EU Water Framework Directive can block harmful projects like these.

Healthy, free-flowing rivers sustain life on earth, providing crucial services to human societies - from supplying water for drinking, agriculture and other economic sectors, to filtering out certain pollutants. Rivers and other freshwater ecosystems also house around 40% of the world’s fish species1, many of which are migratory and swim long distances to seek food, refuge, or to mate.

European rivers are home to migratory fish species like the critically endangered European eel, Beluga sturgeon - one of the largest freshwater fish species in the world, as well as many other endemic species. Whilst all species need clean, free-flowing rivers, migratory species are especially reliant on these clear pathways, as any obstacle to their journey negatively affects their populations. Species that live both in the sea and rivers and migrate between the two, like salmon, are of most concern. Indeed, a study carried out in Norway shows that salmon are threatened not only by disruption of a river’s natural flow, but also by changes in water temperature caused by dams.2 Changing temperatures can specifically affect the growth of young salmon. 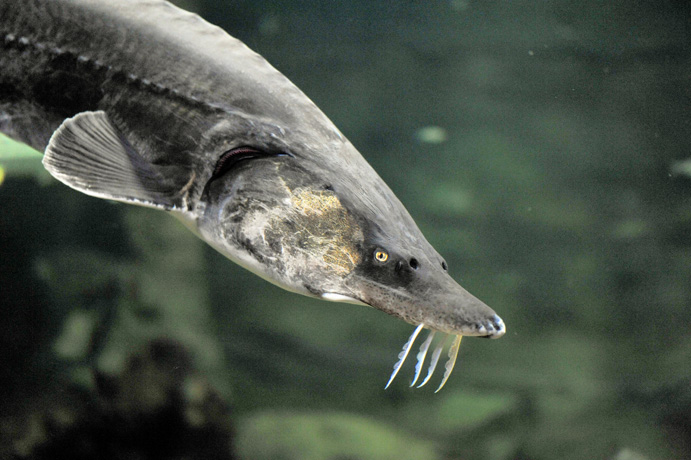 Beluga sturgeons (Huso huso) used to do 2,500 km spawning runs in the Danube and the Volga. Nowadays, their migration is cut to a fraction of its previous glory by impassable dams like the Iron Gates complex.

Currently, 60% of EU rivers are not healthy enough to support people and nature3, and a global study published last year showed that only a third of the world's longest rivers remain free-flowing, due to the impact of dams, barrages and other human-made obstacles. Many of these are hydropower dams and are blocking fish migration routes, destroying habitats and driving biodiversity loss. The situation in Europe is arguably worse, with freshwater biodiversity expert Professor Carlos Garcia De Leaniz going as far as to conclude that “free-flowing rivers simply don’t exist anymore, at least in Europe.”4

Many of the hydropower plants are built with public money or are highly subsidised. Sometimes, they are built despite massive protests by thousands of citizens, like the Murkraftwerk Graz plant in Austria.5 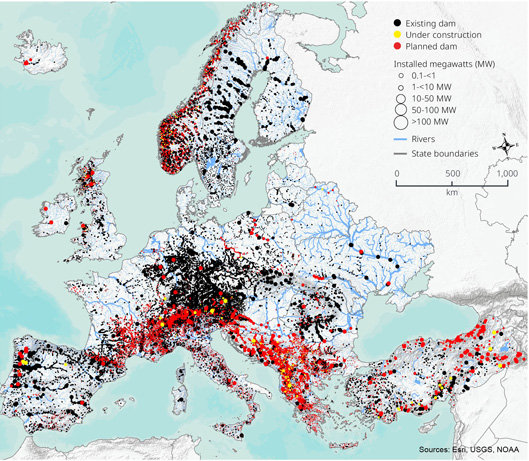 Number of hydropower plants in Europe (existing, planned, under construction).

The rise of hydropower in Europe

For centuries, humans have been using the forces of flowing water - first through mills for grinding grains and then, for more than a century, in the form of hydropower to produce electricity. For a long time, hydropower was hailed as the future of renewable energy, and dams were built across the world to harness this natural power. More recently, however, the environmental problems caused by hydropower have become more apparent. Last year, WWF, together with EuroNatur, RiverWatch and GEOTA, decided to find out how badly hydropower is obstructing Europe’s rivers, commissioning the first-ever mapping of all existing and planned hydropower plants on the continent. The message from the analysis was clear - Europe’s hydropower potential has been well and truly harnessed. 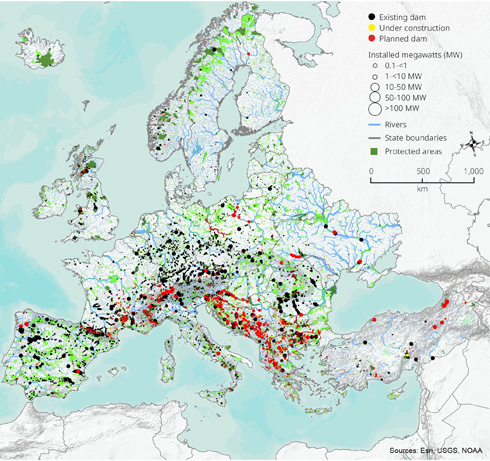 Number of hydropower plants in protected areas in Europe (existing, planned, under construction).

There are currently 21,387 hydropower plants, with 8,785 additional plants planned or under construction. Over 90% of all the existing and planned plants are small, meaning that each plant generates at most 10 MW of electricity.

The impact that these dams have on rivers and their biodiversity – in stark contrast to the contribution they make to renewable energy – is alarming. In the words of Dr. Jörg Freyhof, Regional Chair of the IUCN/WI Freshwater Fish Specialist Group, “dams completely change the ecosystem, turning a river into an artificial lake, and open the door for the invasion of alien species. It’s comparable to cutting down a rainforest in terms of the strong negative impact on biodiversity.”6

One in three freshwater fish species are currently threatened with extinction, and it is estimated that up to 30 species in the Balkans alone could be wiped out if all the planned hydropower projects mapped by our study were to go ahead.7 And it’s not only fish that would be affected. More than a quarter of the planned hydropower dams are in protected areas, which offer safe havens to Europe’s most threatened mammals, amphibians and birdlife. 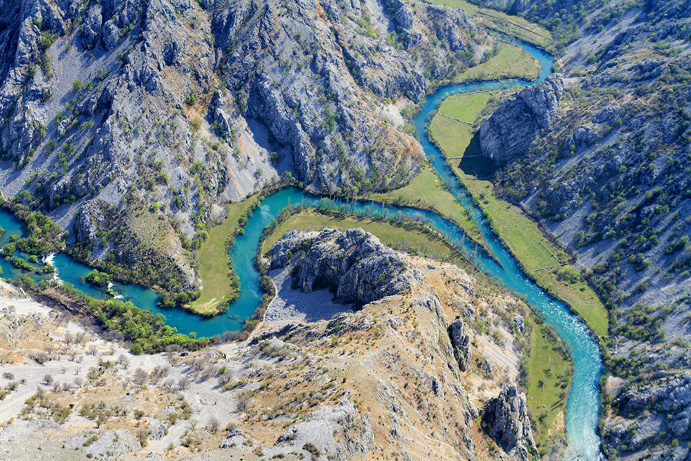 Confluence of the Krupa and Zrmanja rivers, Croatia, two rivers that are also highly vulnerable to hydropower developments.

So, where does Europe go from here?

Whilst the EU must transition to electricity systems that are zero-carbon, affordable, and low impact, hydropower is not the way to do that. Solar and wind tick those three boxes much better than hydropower, and are increasingly cheap, approaching US$0.05/kWh – comparable to the low end of the fossil fuel range and the average cost of hydropower. The EU needs to invest much more heavily in such technologies, alongside demand flexibility and all kinds of energy storage. Secondly, as a major driver of habitat destruction and biodiversity loss, hydropower fundamentally contradicts the EU’s excellent water and nature protection laws – the EU Birds and Habitats Directives and EU Water Framework Directive. Last but not least, Europe’s rivers are already saturated with hydropower and the majority of planned plants would make a negligible contribution to overall electricity generation or security supply. The argument for more hydropower in Europe is a weak one at best. 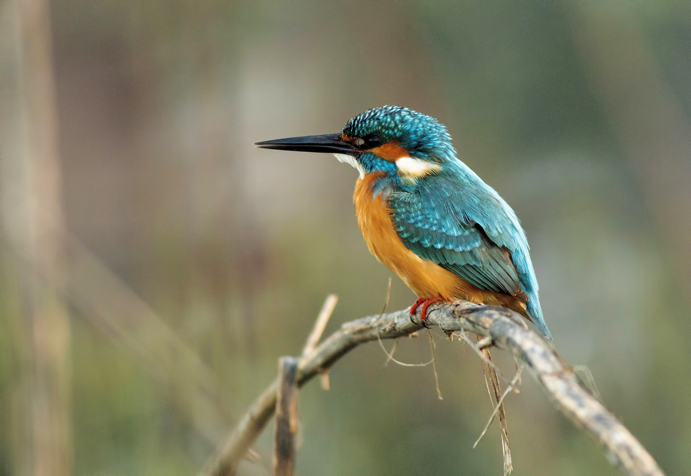 Common kingfisher (Alcedo atthis). More than a quarter of the planned dams in Europe are in protected areas, such as Natura 2000 sites and national parks. These offer safe havens to Europe’s most threatened biodiversity.

So, where does Europe go from here? First things first, EU Member States must put the EU’s existing environmental laws to work for the good of people and nature. The Water Framework Directive legally requires them to block projects which could lead to the deterioration of a river, but the wave of new hydropower plants shows this is evidently not happening. The law has just undergone a thorough two-year review, the diagnosis of which was a clear-cut, clean bill of health.8 Published at the end of last year, the conclusions of this “fitness check” established that the Water Framework Directive is not only “fit for purpose”, but that slow progress in achieving good health for EU freshwater ecosystems is due to failures of implementation and enforcement, and “not due to a deficiency in the legislation.” As such, Member States need to abide by this law and say no to any more projects that are in the pipeline, especially when these fall within protected areas. Far better enforcement is also needed by the European Commission to ensure the law is strictly adhered to, and to put a firm stop to the abuse of so-called “exemptions” – a flexibility in the law which allows projects to go ahead. In theory, this should only be used in exceptional cases, but in practice, it is allowing many damaging projects to go ahead. Currently, exemptions are being approved left, right and centre: 53% of EU rivers are covered by at least one exemption, many of which are to get approval for more hydropower plants. 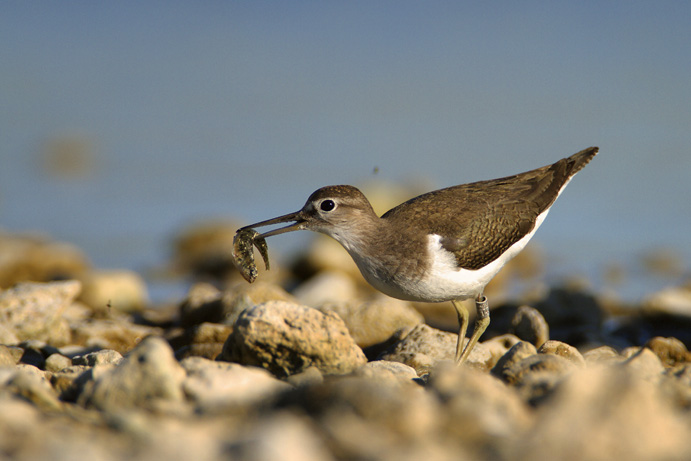 The EU Biodiversity Strategy: A chance to tackle the issue at the source

In addition to using existing legislation, the EU’s Biodiversity Strategy for 2030, published on 20 May, is another tool which can be leveraged to tackle the impact of hydropower dams on biodiversity. Within this Strategy is a positive and concrete commitment to restore 25,000 km of free-flowing rivers, including through dam and barrier removal. Many dams in Europe, including hydropower dams, are old and/or obsolete, and are more expensive to maintain than to remove. Taking down these obstacles enables life to return remarkably fast to a river. As such, dam removal is also an efficient, cost-effective way for governments to meet their obligations under the Water Framework Directive. However, the EU Biodiversity Strategy  does not anticipate how to address subsidies that finance harmful projects, such as feed-in tariffs for small hydropower plants.

Despite these gaps, however, the Biodiversity Strategy is a step in the right direction. Given that freshwater species are amongst the most vulnerable in Europe, EU Member States and the European Parliament must now get behind and make full use of the Strategy, as well as of existing water and nature protection laws, to tackle the environmental havoc caused by hydropower at the source.

Interested in supporting WWF's efforts to stop new hydropower from being built in Europe? The Ötztaler Ache is a beautiful river in Austria where a new, unauthorised hydropower plant is currently being built. Find out more and sign the petition to stop the construction of this plant:

HYDROPOWER IS NOT GREEN

Figure 1: Ecological status of natural water bodies in the EU.

Hydropower dams affect most of the quality elements which determine a river’s ecological status, as defined under the EU Water Framework Directive. These include hydromorphological quality elements (changes to the physical shape and/or flow), biological quality elements, and some of the supporting physico-chemical elements, in particular the water temperature and presence of nutrients. Currently, 54% of natural river bodies in the EU fail to reach this good ecological status (Figure 1). Generally, lakes and coastal waters are in better shape than rivers.

Some of the negative impacts of hydropower dams:

If the EU is serious about positioning itself as a champion for biodiversity, it must fully implement and enforce the Water Framework Directive to block new hydropower development in Europe, and follow up on its commitment in the EU Biodiversity Strategy to restore 25,000 km of free-flowing rivers, including through dam and barrier removal.

© Sustain Europe 2020. All rights reserved. Powered by 100% Green Energy. Our pledge to the Environment.