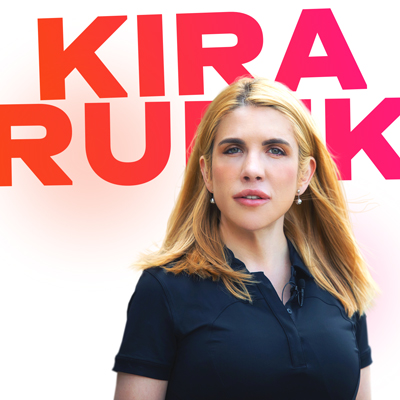 Kira Rudik was born in Uzhhorod in Ukraine, close to the Slovakian border. After graduating from National University of Kyiv-Mohyla Academy with a Master’s in Computer Science, she had a highly successful career in technology and software, working both in Ukraine and the USA as an IT entrepreneur who headed Ring Ukraine company and ensured its acquisition by Amazon for $1 billion. She studied Executive Leadership at Stanford University before becoming a Member of Parliament of Ukraine and First Deputy Chairwoman of the Parliament Committee on Digital Transformation in 2019.

Today, Kira is one of Ukraine’s most influential women. She leads Ukraine’s Golos Liberal Political Party, a liberal, pro-European political party with 20 MPs, and is Vice-President of the Alliance of Liberals and Democrats for Europe (ALDE). Kira was included in the TOP-100 most influential women in Ukraine according to the Focus and Novoe Vremya magazines, and in November 2022, she received the Women In Politics Champion of the Year Award from The Alliance of Her.

Tirelessly working towards building international support for Ukrainian sovereignty and establishing the framework for the reconstruction of Ukraine, she has become a vocal advocate worldwide for more aid to Ukraine. She says she would once have described herself as “passionate about digitalisation, equal opportunities, startups and protection of homeless animals,” but that now, with her country at war, “I am passionate about one thing: the victory.” Kira’s love of animals still shines through, however, with her cat Michelle often featuring in her videos!

Kira, thank you for joining us during this very difficult year for Ukraine. We have all been witnessing the jubilant scenes in Kherson as the city celebrated liberation from Russian forces. What is the mood on the ground right now in Ukraine?

People are concerned, and of course, people are devastated by their understanding of the upcoming winter. However, we are not taking it as a tragedy. We are taking it as a challenge, and we know that we will have to survive it. And not only just every single person but the communities around us too. So there is more responsibility to take on, to take care not only of yourself and your family, but also of the ones who will have a hard time surviving the cold.

You know the best way to describe the mood is that right now, we are not only calculating the days of the war, we are also calculating the days of the winter. And today is day five. And we have a long way to go. We understand that the missile attacks on our infrastructure will continue, and we understand that the cold is still to come. So people are preparing: saving diesel, gasoline and wood and food. But there is something important here: this is not new for us.

At the very beginning, we were preparing for a siege. I have so much food stored everywhere in my house and also water because we didn't know if there would be any water supplies. We have our nuclear backpacks where we have canned food and also water that we prepared in case there would be a nuclear attack. So I'm sure that we will survive and we'll go through that. No matter how hard it will be. And it's very important for me that the anger that we are having right now, the anger that we are not having the basic level of comfort and the basic necessities for survival, is directed at Russia. We know that in Ukraine, everybody is concentrated on this same goal. And we also know that right now, when no matter how cold it is at your home, there is a place where it is definitely colder. It's in the trenches. And this is why we don't have the right to complain.

You stated earlier this month at the Global Food Security Forum that "One of the lessons that this war teaches us is how connected we are to each other, how dependent we are on each other, and how fragile are the connections that are between us". With these lessons learned, what, in your opinion, does the future relationship between Ukraine and the European Union look like?

You know, probably one of the first good things that happened since the beginning of this war was us getting the candidacy of the European Union. I was in Brussels that day. And if you hear a story about a crazy woman running around the European Commission screaming "Ukraine!": it may or may not have been me! Then my father called me, and he said, "I do not understand what the candidacy means. But I do know right now that we have a future."

It was so, so important because we do see our future as a rightful partner, as a part of European Union. You know, one of the most scary moments, emotional moments for me, was when we thought that we were not getting the candidacy and we will get like some hybrid thing instead, like a special pass or something. Because we have so many soldiers on the front who were actually putting on their backpacks two flags: the Ukrainian flag and the EU flag. Because in our mind, we are already in the European Union, but for some reason, we are not being acknowledged just yet.

And I was just thinking, "What am I going to tell them if they ask "Why didn't we get it? Did we fight under the wrong flag?"" So I'm grateful and glad that we got it. And right now, we have our path to the European Union. And I think with the way how we see our future on the ending of the war and the rebuilding and then joining NATO, it will be very critical that the processes of rebuilding Ukraine and the accession to the European Union will come in parallel.

It will be critical because of the way how we will spend the money. It will be critical to help open up our markets to Europe and open European markets for us. It will be critical so that once we are rebuilding, we are already rebuilding as Europe. Because, you know, I travel a lot right now to different countries to get more and more support, most of all probably to Poland. And every single time I'm there, I'm so admiring what Poland has achieved in the infrastructure, in the way how their government works. But it's always bittersweet for me because I'm looking at it, and I'm thinking, "we could have had that as well." But we can have it, and I'm sure that we will have it. And even though the window of opportunity for us is really narrow in terms of historical time, I also think it's super definite. In parliament right now, probably half, maybe more, maybe 60% of the bills that we are voting for are EU-related ones. We are balancing our legislation with the EU legislation that are on the list that was given to us in terms of confirming the candidacy status and then harmonising our legislation with EU legislation. So we are doing that, I can tell you. I don't think there is anything in the world that will change our dedication to becoming an EU member. And I think right now there is not any argument against that.

Help support the residents of Kyiv by donating to the charitable foundation Darnycharny:

© Sustain Europe 2023. All rights reserved. Powered by 100% Green Energy. Our pledge to the Environment.